Wow, Day 21 already?! I can't believe we've been doing this for three weeks!

There are SO MANY WINNERS, but several of those I haven't heard from. If you've been entering my rafflecopters or comment/follow comps, please check your email and make sure aimee@aimeelsalter.com isn't blocked on your filters. I don't like to name winners without their approval, so may be waiting for your confirmation before sending your prize!

As for today, I know it's a stressful time leading up to Christmas, so I just wanted to share a little something from EVERY UGLY WORD that was a bit of fun for me. I toyed with the idea of writing a novella for EUW - an alternate viewpoint of the story from Matt's point of view, to give him a little of his due.

The project didn't pan out, but I thought it might be fun to let you see a little something from behind his eyes.

*** WARNING: Contains coarse language, and there are spoilers for EUW in this passage ***

This correlates to the part of EVERY UGLY WORD when Ashley and Matt went to Finn's party the night before. There Finn caught Ashley searching his room for her letter. Matt was angry with Ashley when he had to take her home because he thought she was drunk and making stupid decisions.

In this scene he's returned the next morning to talk to her before they head to the art room. 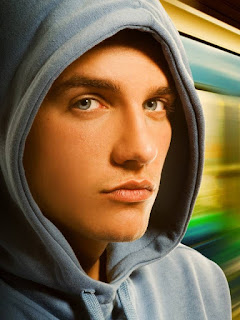 The truth is, I drove to Ashley’s house that morning still pissed off about the night before. Pissed because she’d sworn she was never getting drunk again. Pissed because being nice to her got Karyn pissed at me. And pissed because, let’s face it, I was a walking punch to the face at that point.

So, yeah, I didn’t pull the truck up Ashley’s driveway in the mood for a giggle.

I yanked up on the hand brake and almost tore the damn things off. When I saw the other car already parked there, I just assumed her mother had a date, or something. No way was I following that train of thought to its natural conclusion. I was too busy rehearsing exactly how to chew a hole in Ashley’s ass without making her cry. Because she needed to think. But I hated it when she cried.

I jogged to the front steps and paused, took a deep breath. I didn’t want to lose my temper and yell at her, just get her thinking. But the door squeaked open before I’d even knocked twice. The first thing I noticed was Ashley’s eyes looking way too big, even for her. Like she was scared. Which pissed me off more, because when had I ever given her a reason to be scared of me?

I took a breath. Don’t jump on her if she’s already nervous. Give it some time. “How are you feeling this morning?” I sighed. “I figured you’d want a ride.”

“Are you ready?” I said through my teeth.

Movement behind her caught my eye. When I looked up, I was glad I’d been clenching my teeth. Otherwise my jaw would have wiped the floor.

“Dex?” I might as well have vomited the word. Dex was Ashley’s ex-boyfriend. The asshole who treated her like she was worthless, then bailed. Literally. A year ago he left town without even warning her. The night before Prom.

And there he was, standing in her entryway looking cleaner and, well, bigger than I’d ever seen him.

The fact that she hadn’t kicked him out on his ass left me stunned. But then he stepped forward and put his hand on her shoulder, like that was totally normal. Like she belonged to him.

Are you kidding me?!

For a moment my anger disappeared behind shock and . . . something else. Looking at his hand there, on her, sent a jolt to that weird space right behind my navel. It felt like the floor had just fallen out from under me. He was touching Ash. She was letting him.

“Mike, right?” he said, all guttural like he was trying to make his voice deeper than it actually was. I tore my eyes off the spot here he touched her and glared at him.

Ignoring the weird quiver in my gut that wouldn’t go away, I jerked my gaze back to Ash, making the question as plain on my face as I could. She couldn’t be getting back together with him, surely?

When had he even come back? Why hadn’t she told me?

“Dex is back,” she said apologetically, as if somehow she were to blame. “He came to see me.”

“No kidding.” When she didn’t answer, I looked back at Dex. He met me stare for stare, but he was working for it. I hadn’t liked the way he’d treated Ash even before he bailed. No way was I making it easy for him now. And if he didn’t take his hand off her shoulder I would happily rip it off for him. At the shoulder.

“Come in,” Ash said suddenly, stepping back and away from Dex to open the door wider. “It’ll only take me a second to get ready.” Then she looked up at him, and she smiled.

It didn’t reach her eyes.

A different interpretation of the fear in her eyes when she opened the door occurred to me and it took every ounce of my self-control not to shove my way between them while she explained to the douchebag that we were headed to the art room at school to work on our entries into the National Young Artist of the Year competition.

I should have been focused on that, on getting my portfolio finished, on getting to New York. But I was too busy wondering what Dex had done to scare her before I arrived, and how I might take it out of his hide, to listen closely.

She turned to me and I tried to glare my opinion on the idea so she’d make an excuse. But she just flapped a hand at me and said, “Then you don’t have to wait for me.” Like she was giving me a present.

Fuck that. “Can I talk to you alone for a second?” I touched her arm, but she didn’t lean into me like she usually would. Instead, her brow creased.

“Can’t we talk at school? I’ll be there in a few minutes.”

I couldn’t believe it. She was going to forgive this dickhead. Then get back together with him. I could see it. And the image left me hollowed out. Like someone had removed a vital organ, then sent me on my way.

What the hell was wrong with me?

“Matt, don’t—” her hand landed on my arm. I felt the warmth from it and, out of nowhere, I had to fight back a shiver. The sensation shocked me so badly, I didn’t even look at her.

“Later, Dex,” I said through my teeth. “Try not to disappear again before you get her to the art room.”

He tried to look tough, but I was already gone. I had to get out of there. I had to get away from Ash and that asshole that she was idiotically going to forgive.

I stormed down the steps and back to my truck, slamming the door closed the second I’d slid in behind the wheel. I held onto my anger as I pulled out of the driveway too fast and drove the mile or so to school.

But no matter how I tried, I couldn’t shake off the feeling that I wasn’t running to something. I was running away.

Away from Ashley, and the way her touch had suddenly opened a gaping hole in my gut.

Posted by AimeeLSalter at 10:56 AM