I think I'm going to online stalk Galit Breen and make her my best friend. If you're a parent you need to watch this. Seriously. Could save your kid's life.

It happened. Dark Touch is out today. I FINALLY have two books in circulation. Can you believe that?! Because I can't. Seriously. Can't.

Because my brain is fried, and my heart is full, and there's so much more going on than you know, I'm useless today. There's going to be a lot more thoughtful, analytical, and just plain silly content coming over the next week, but for now, let's just look at this beauty, shall we? (Insert heart eyes here). 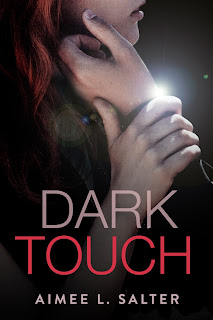 Tully isn't alone in her skin. Whenever she touches someone, they feel everything she feels. All her ugliness. All her darkness. All her pain. The only thing she wants is to be left alone--and to finally get out of her small Oregon town.But then she meets Chris. He's everything she's not. Light. Trusting. Innocent. And he wants Tully.Tully knows she should spare him the heartache of being with her. But when he touches her, she's not sure she'll have the strength to push him away--until he learns about her dark past, and what really goes on in her ever-decaying home.From the author of Every Ugly Word comes a poignant, emotionally raw story about the violence that plays out behind closed doors and the all-consuming passion of first love.

And just in case you missed it, you too can be the proud owner of Dark Touch just by clicking here!

Posted by AimeeLSalter at 2:20 PM 3 comments:

Things are crazy, kids. But before they spiral into actually insane I want to say thanks for sticking with me through 2015 and into this new book release!

I'm offering a ton of prizes BEFORE the book comes out --this will be drawn the morning of the release (which next Tuesday, can you believe that???)

Don't be fooled if the title of the giveaway only shows one prize, those little circles underneath the prize are each a new prize offering, so tick along and enter for all of them!