Want to know exactly how crazy it is to live in a writer brain? (Or in same town as an author?) Read to the bottom and comment for your chance to win a digital copy of Every Ugly Word!

A couple weeks ago, on my way to an author event in Portland, Oregon, I had to pick up some printing at the local Staples. As soon I reached the counter, I saw a young man in line on the other side who looked exactly like a character I'm currently writing.

All nods to normalcy fled.

My heart started pumping, and writer brain took over:

Maybe I can take a photo of him surreptitiously, so he won't notice?
Can I get the angles I need to see his face clearly so I can use it for my visual diary? It'll show if I zoom up, right?
What if someone catches me? I'll look like a weird stalker and they'll probably call the Police.
But he looks just like Aiden!
Am I a creeper if I secretly take photos of a guy half my age--even for professional reasons?
Why am I talking to myself as if I don't already know what I'm thinking?

The unsuspecting Staples agent was able to help me, and managed to maintain her smile despite my preoccupation with the line forming to her right. Eventually she got my stuff for me, but was called away to help another staff member.

While waiting to pay I threw good sense to the carpet. I couldn't resist the temptation to try to take a photo of the guy.

Unfortunately, I was juggling my purse, my phone, another bag, and the printing which had just been handed to me. I was also at an angle that left me little in the way of photo fodder. I'd almost settled on exclaiming loudly over a display of school bags behind him and how my mother REALLY wanted one of those, when I raised my phone... And managed to drop everything I was holding, and then trip on my purse.

This was the resulting "covert" surveillance photo. 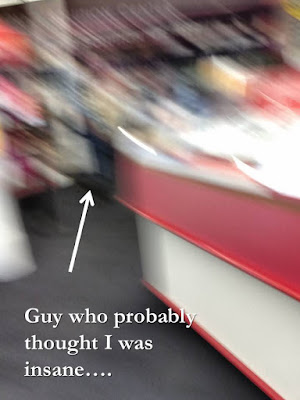 I'll admit, it was incredibly embarrassing. I don't think anyone realised I was trying to take a photograph, but since the guy and a couple other people were staring at me, I paid for my printing and fled.

The story should have stopped there, but I literally couldn't get past how much this guy was the doppelganger for a character I had. How awesome it would be to have pictures of his face and build? It wasn't like I'd be looking at them for personal reasons . . . So when I reached my car in the parking lot I put my things in the car then stood next to it.

Okay, if he comes out in the next two minutes, I'll ask him.

I'd reached about four minutes of freakishly loitering in the parking lot when he finally came out.

I can only imagine what he thought when this short little woman stopped him on the cement and asked for his picture. But bless him -- his name's Brandon -- he was totally game!

It turns out, Brandon is a photographer, and accustomed to asking strangers if he can take their pictures too. So with several assurances that I'm "not a stalker" I gave him a free book (I had boxes of them in my car for the author event) and asked for a couple pictures.

All's well that ends well, right? I have to say, Brandon wins the Nice Human Award, for being very sweet about a weird situation, and understanding about what could be misconstrued as Scary Creeper Behavior.

If you'd like to visit Brandon's photography page, Rockstar Images, on Facebook, you can! Tell him I sent you, and I say "Thanks for not laughing at me--or calling the Police!"

Your Turn: Have you ever done something really nuts to a complete stranger? Or had a stranger do something nuts to you? Tell me about it! You might win a copy of Every Ugly Word!
Posted by AimeeLSalter at 3:30 AM