Can you believe we've been going for almost two weeks? CRAZY! And there's so much more to come!

The main character in Dark Touch is named Tully (pronounced "TUH-lee"). She's got it rough. At seventeen she already has a couple tattoos and a lot of life experience.

I love Tully's tattoos, and although I couldn't find anything exactly the same as hers, I did find some in theme. So I'm giving them away! 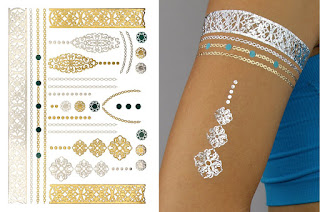 They're temporary, metallic tattoos that you can use whenever you want. And I have FIVE sheets to giveaway! This is also your chance to be one of the first to see the cover for Dark Touch before it's revealed on December 18th!

So enter now. The winners will be announced next week!

a Rafflecopter giveaway
Posted by AimeeLSalter at 3:30 AM