I'm a day behind, but I didn't want to skip this one!

There's no doubt that most authors prize the letters, emails, comments from readers who've connected with their books above all other accolades. Knowing a real, live person has read your material and it's found a place in their heart or impacted their life is literally incredible. It's those moment's I've dreamed about since I was a teenager.

Two specific incidents stick out for me, but I'll only tell you this one: 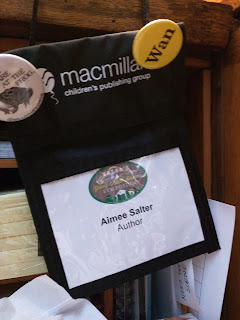 A little over a year ago I was privileged enough to be invited to join a large conference in Portland, Oregon, where librarians, teachers, and youth workers converged to learn from and about YA authors and books. That was my first signing at a conference. I expected to show up and maybe get a handful of librarians who wanted to get my book for the students who'd been bullied. But I never expected this:

While I signed books and met readers, I noticed a young woman, probably in her early to mid twenties, standing off to the side, a few feet away from my table, staring.

At first I thought she was in line to meet the author next to me as she stood closer to that line. But her back was to the people lined up. Was she trying to read about my book? Or just distracted?

Then as my line dwindled, she stared right at me.

A minute later I reached a lull and turned to smile at her. Did she need help?

She gripped the straps of a tote bag with white-knuckled fists and seemed to shrink in on herself. But when I smiled at her, she walked hesitantly up to my table, no longer meeting my eyes, instead digging in her bag.

"I-I have your book already. Will you sign it for me?"

I was flattered. "Of course."

Her hands shook as she passed me the book and I realized she wasn't distracted, or uncertain. She was terrified. (Of me? Of the crowd? Who knows). Painfully shy, she'd been standing off to the side trying to drum up the courage to come to my table. She'd been waiting for there to be no one else in line.

I smiled again to put her at ease, took her name and asked her if she wanted me to write a specific message. She shook her head and glanced around, checked over her shoulder. But she was the only one in front of me--a fact for which I'm truly grateful, because I believe if she hadn't been, the best compliment I ever received would have stayed firmly stuck in her throat:

While I wrote a pithy dedication in her book and thanked her for bringing the book, she stepped close enough to lean slightly over my table. Her voice was barely above a whisper.

"I already read it. I w-wanted to thank you for writing it. It . . . it really helped me. I kn-know you were bullied." She wasn't the first reader to communicate this, but I'm always grateful to hear it. I met her eyes, smiled widely and thanked her, sincerely.

Then she said, "I came here to meet you because I wanted to tell you I think it's a really important book."

She had tears in her eyes.

I was stunned. I'm pretty sure I stumbled over something very insufficient, like, "Wow. Thank you! Were you bullied too?"

She nodded, but didn't say anything because a handful of new readers chose that moment to arrive at my table. They respectfully gave her a few feet of space, but their movement and hubbub behind her caught her eye, then mine. I glanced at them over her shoulder, then turned back to speak to her again, still fairly dumbfounded. What was her story? Was there something specific that had resonated for her? But I never found out because she gave a shaky little wave, turned her back and walked away.

I still have moments where I wish I could find her and talk to her--not so she could tell me about me, or my book. But because I was so touched by how clearly difficult it was for her to be there, to be surrounded by people. Yet she'd urged herself to come to talk to me.

It was easy to see the pain and fear in her eyes. I wish I knew her story. I wish I could encourage her, and befriend her, and support her through what is clearly a life that remains somewhat traumatic.

Instead, she gave me the best compliment I've received yet. And I'll always remember her.
Posted by AimeeLSalter at 11:04 AM