How Far Have You Come? How Far Do You Have to Go?


Working on a very in-depth revision of my book has reminded me of some of the difficulties of writing.

But it's also showing me how far I've come.

The following is an archived post, but it's one I've needed to refer back to recently - and one that challenges me to keep going. I hope it does the same for you...

I haven't always been a writer. My CV reads like a patchwork quilt of careers.  (I'm told this is common in creative, right-brained types).  But buried among a list that includes Recruitment Consultant, Project Manager, Marketing and Government Assistant, is one job I ended up doing twice:  Trainer.

I tell you that, only because it's the context in which I learned the following learning scale - and it's something you probably need to know. 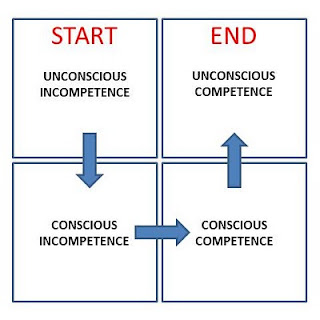 This is where every writer starts.  Whether or not you're naturally gifted, the first time you embark on telling a story in words, you're incompetent.  Accept it.

CONSCIOUS COMPETENCE:  You Know What to Do... But It's Work.

My former agent once said writers who were just getting a grasp on the craft reminded her of one of those American Idol contestants.  You know the ones: They listen to the judges, take the advice - and work so hard to get it right that everything comes out robotic.

UNCONSCIOUS COMPETENCE:  Oh, That's Right - This Used to be Work.

The whole point of learning the craft, listening to those more experienced, and emulating those who've been successful, is that one day it just happens... Without even thinking about it, you sit down to write a first draft and it comes out great.  (Or at least, a version of 'good' that is much, much closer to 'great' than most can achieve).

There are no roadblocks, except those you raise for yourself, because you're there.  You're good.  And you don't even have to think about it.

SO, WHAT'S MY POINT?

This:  Most aspiring authors are in the first two groups.  It's unavoidable.  I suspect there are certain things we can't learn until we're working with an editor or have finished several books.  But if you imagine each of those boxes in a graded scale... well, you can also imagine where most of the 'aspiring' are sitting when they turn into 'author'.

Your Turn: Where do you think you sit on the scale?  Are you doing anything to move further along?

Posted by AimeeLSalter at 1:01 PM